We had a great days cycling today, James and I were well rested and really enjoyed the day despite the highest climb of the tour at 1245 feet climbed.

We set off early, We are not pushing the pace because we like to stop, see the things of note on route and take pictures of town and county signs – these really punctuate our journey up the country.

The weather was cool but dry and the winds favourable, it was a joy to ride to Lancaster.

The most famous Lancastrian is of course the Duke of Lancaster, more commonly known as HRH Queen Elizabeth II…when I attend formal livery dinners in the City many of the bods toast the Duke of Lancaster instead of the Queen. Bit pretentious if you ask me but since they are all richer than me I say live and let live!

The Lancaster Assizes used to sentence to death more people than any other town in the country outside London which earned Lancaster the soubriquet ‘The Hanging Town’. A popular hobby in Lancaster was suppressing Catholicism, there is a memorial to the Lancaster Martyrs but sadly our route does not take us past it…

Lancaster was the location of the Pendle Witch Trials in 1612 when twelve women and men were tried for witchcraft, ten of them being subsequently hung with an eleventh dying in prison. The accused came from two different families that appeared to make their living by posing as witches. The two groups made a series of accusations against each other which went against them at the trial.

John Richardson (comedian) and the bloke who coined the word dinosaur come from Lancaster.

We really wanted to stop for a cup of coffee but unfortunately very little is open at 9.30 on a Sunday morning in Lancaster – we didn’t fancy McDonalds! We gritted our teeth and push on into Cumbria! 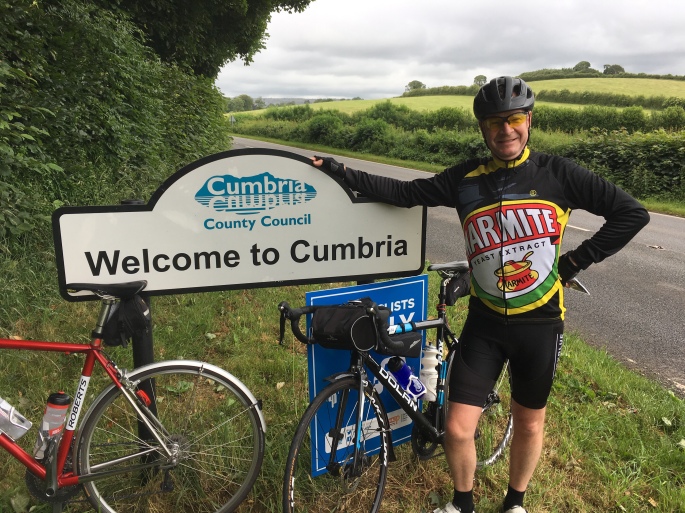 It didn’t take long for us to reach Kendall, we were making great time and the countryside looked gorgeous, not particularly clear sky’s but dry and very lovely to look at.

Kendal is famous for mint cake and snuff, two staples of all right thinking LeJoGers. Kendal’s nick name is

after the local grey limestone used to build the town.

Early travellers to Kendal complained of eight miles of

“nothing but a confused mixture of Rockes and Boggs”

…I was hoping that the roads would have improved a bit since then however there was some rough bits of road riding. My wheels developed an annoying tick every revolution and I’m not sure what is wrong. I really don’t want to break a spoke – would be very inconvenient, especially when we are enjoying ourselves so much.

Kendal mint cake was discovered accidentally by Joseph Wiper during his search for a clear glacier mint. It’s been used by notable explorers Earnest Shackleton, Edmund Hillary and Maurice McQuitty.

John Cunliffe comes from Kendal, I need not explain who he is as all the world knows the name of the creator of Postman Pat. Some dude called Wainwright who liked walking also lived here.

The pace notes only had one climb on it and it’s one of the biggest of the ride up Shap Fell. It was billed as 9 miles long, 2 false summits and was 9% at its steepest.

The climb went went really well, long but steady. James looked strong and we had favourable tail winds. It helped that the views were stunning! This is a beautiful country and a joy to ride through 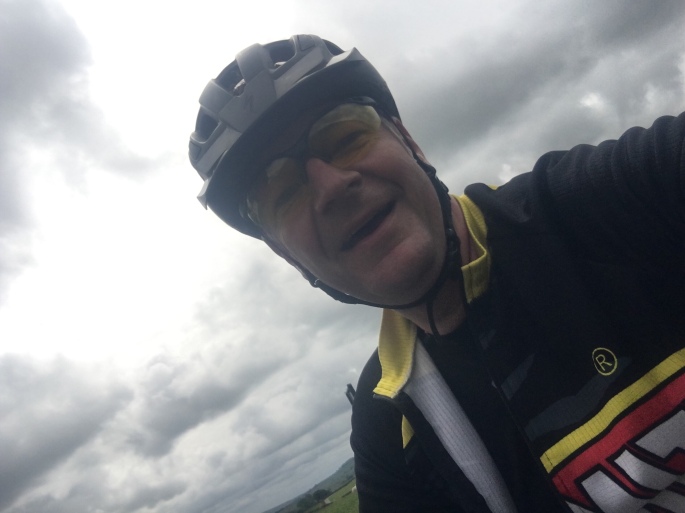 Shap is famous for its pink granite (used at St Paul’s Cathedral) and its shockingly long road climb up to the top of Shap Fell before leading us to its three pubs and one fish and chip shop.

Shap’s biggest claim to fame however was that it featured in Withnail and I:

Uncle Montys cottage is located near Wet Sleddale reservoir. Sadly our route does not take us past it…

We stopped at Shap bowling club where we had some awesome chilli cooked by the top fellows from Discover Adventure – those guys take great care of us!

The weather turned a bit damp but not excessively so and the run into Penrith was all downhill – free miles!

Penrith is lovely – very pretty town with a prosperous looking high street. It looks a nice place to live.

One of the most notable things about Penrith that I discovered was the fact that an 18ft fibreglass statue of King Kong once stood in the Skirsgill Market. It’s too bad it’s gone – I would definitely change our route to see that…

Charlie Hunnam, the British actor who starred in the Sons of Anarchy TV programme (Jackson Teller) was born in Penrith.  He says it is just about the absolute worst place you could hope to live. He’s wrong, I once lived in Swindon.

We had three milestones today – after Shap Fell we had climbed more than the height of Everest – pretty cool! We also passed through the half way point as we left Penrith – 483 miles! We saw a chalked line noting this on the road, put there by some nice chaps no doubt!

Who could have done such a thing?

Carlisle was established by the Romans of course, it was established to serve the forts of Hadrian’s Wall. Carlisle’s nickname is ‘The Great Border City’, they were not very imaginative in those days.

Carlisle was cursed by the Archbishop of Glasgow in 1525.  The curse runs to 1,069 words, beginning:

“I curse their head and all the hairs of their head; I curse their face, their brain (innermost thoughts), their mouth, their nose, their tongue, their teeth, their forehead, their shoulders, their breast, their heart, their stomach, their back, their womb, their arms, their leggs, their hands, their feet and every part of their body, from the top of their head to the soles of their feet, before and behind, within and without”

He was a bit upset that Carlisle was home to the border Reivers who enriched themselves at the expense of their enemies (i.e. everyone else including the Bishop of Glasgow).  Its carved on a 14-tonne stone in town.

Shortly after it was installed Carlisle suffered terrible flooding, foot and mouth disease and a drought of goals for Carlisle FC. There was discussion on removing it because it was felt it was bringing bad luck.

According to Wikipedia the only notable band to emerge from Carlisle was ’70s rock outfit Spooky Tooth (nope I’ve never heard of them either!).

Further on we passed our third milestone – 500 miles! Not the best end of town to be chalking a milestone but we did not hang about!

We arrived at the hotel just in tone to miss the rain – a perfect day all round! The Premier inn has an empty swim pool to stash the bikes….Roly and Speed Rebel took joy in cycling round the inside of the pool and were promptly told off by our tour leader for not wearing a helmet!

All in all a great day!